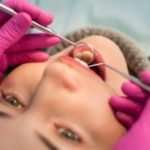 Strengthen the hygiene schedule by focusing on your patients’ needs

The recall system: Who gets overdue dental patients back in for an appointment?

What to know about bone grafts